I finally caught my breath next to a large brown bear chasing a rather panicky deer. The Ted Stevens International Airport in Anchorage is like a great zoo for dead things.

The Chugach Mountains glisten under bright sunshine to the east and out the large glass windows of the airport. 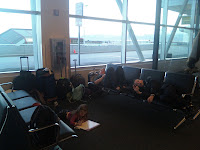 The wake-up call came early this morning. It seemed like I just put my head to the pillow when my daughter jumped into bed with us at 3:45 a.m., just a few seconds before the alarm went off. Turns out all of our packing the evening before and a plan to leave for the airport an hour before our goal of being there an hour before departure was a great failure.

Mondays are terrible days to travel. Period. Dozens and dozens of suits lined up against the wall waiting for an automated check-in machine. Traveling with Morris the gecko meant we had to check in at the agent desk. The line moved like people waiting for an Eastern European toilet.

The ticket agent was a peach. She told me no less than four times there was no way we’d make our flight as she happily charged my Visa $100 for a pet that cost $39. Not to take away from the intrinsic value of an animal aside from its pet-store price.

She refused to check us all the way through, because she was convinced we wouldn’t make our Anchorage connection in Seattle.

We ran carrying heavy bags on our shoulders and wheeling the rest of our belongings behind us. Morris stood on all four legs with his belly high off the ground as if trying to find balance or meaning in the terrible commotion.

The TSA agent at security was the nicest I’ve ever met. She inspected Morris and instructed Carson to take care of this good-looking little guy. We put our shoes and coats on, repacked and ran down the people movers looking for gate A.

The ticket agent at the gate was a real peach. Oh, wait, I said that. Turns out there is a pattern with Horizon ticket agents when you’re late. They have no patience at all. After a good tongue lashing about causing other passengers to be late, we climbed aboard a very crowded Bombardier bound for Seattle.

I smiled at Cheryl as the sweat dripped off my head like it did the last time I had a good sauna.

Upon landing in Seattle, we found out our connecting flight to Anchorage was about as far away as you could possibly be in the airport. So we ran to catch a train to catch an escalator to find a friendly Alaska Airlines ticket agent waiting for us with five tickets in hand.

“You must be the five people from Portland without boarding passes?”

“Nothing to worry about sir, we’ll get you on board soon.”

I collapsed in my seat dripping sweat once again and slept on an off between having to tell Gabrielle to stop kicking the seat in front of her. I set up some videos for the kids to watch, played Angry Birds for an hour and dozed until the bumpy landing in Anchorage.

If you know anything about me by now, you know I’m not a detail person, preferring instead the bigger picture. If I had lived 100-years-ago, I’d be traveling always with an assistant.

I neglected to tell our housing organizer that we were arriving Monday, substituting Tuesday instead. So here we sit in the Anchorage airport from 10 a.m. to 3 p.m. waiting for a shuttle that will take us to our hotel where a 3 p.m. check-in time awaits us along with a good swim, a shower and an early bed time.

There were plenty of negatives this morning. The good thing is we’re together here in Anchorage, our new city. We took a walk to the other side of the terminal to look at downtown and then a peek at midtown. Somewhere out there we’ll find a new home, and these mountains will be our backdrop from now on.

The future is looking good.