The green numbers didn’t add up. How could it be 6:18? I set the alarm for 6:00. My sleep-filled eyes started to focus on the eerie light, while my cobwebbed mind began firing to warm up the memory center. Once a little heat was generated, I realized I was supposed to meet Jon at the trail head at 6:30.

Like a high-speed drunken scramble, I dressed two legs at a time and ran out the door for a wet morning run.

As omens go, it wasn’t that bad.

Cool down was a pot of Dragon Well green tea and checking E-mails. That’s about the time a small box popped up in Facebook. “Are we still on for our meeting today?”

If I could’ve seen my face, I’m sure the color drained as my memory caught up with the words on the reminder. I hate being late for meetings.

I argued with myself briefly about the meeting time, some confusion telling me it was for 9:30, still 20-minutes away. But a quick check of Google calendar confirmed the 9 a.m. meeting time.

I had a calendar full of such meetings. A full-time job keeps you from making all the connections you’d like to, and there are a lot of people around Missoula I’m trying to catch up with.

By 1:30 p.m., I had accomplished several meetings, and I was looking forward to getting home to check up on the job search and finish some correspondence.

Just as I sat down at the computer to start writing, my wife said something about not giving Gabrielle any more of some new granola bars we bought at Costco the day before. I remember trying the nutty bars at a sample table and pointing out that these bars contain no peanuts, wheat or gluten. Perfect for a little girl with allergies.

I acknowledged her without realizing my daughter was laying on the couch with the throw-up bucket curled in her little arms.

As my wife walked out the door to take our oldest son to track practice, she told me she’d given her Benadryl, but that she had thrown it up about 45-minutes later. “Check and check. See you in a bit.”

Allergy attacks aren’t common, but with a good dose of Benadryl, Gabbers usually feels better in a couple hours.

After a few minutes I noticed she was itching her tummy and bouncing on the ground scratching the back of her knees. I told her to come over so I could check the hives. They were bright and angry, making her skin tight all over her stomach.

Something was different about this attack, and I started putting all the information together again in my mind. She had taken a bite of the bar at about 1:15 p.m. My wife gave her a dose of Benadryl when she noticed some hives pop up on her arms. Gabbers threw up about 45 minutes later.

I started searching for the phone number of a friend who works at an allergy clinic in town.

Gabber’s ears started to turn really red, and she could barely control the itching.

I left a message to this effect: “Gabbers is having  pretty nasty allergic reaction to a piece of granola bar she ate today. She’s got hives, she threw up 45-minutes after my wife gave her Benadryl. Her ears are turning really red, and she’s fairly miserable right now. Tell me I don’t have to go to the emergency room.”

There it was, my real worst fear. We don’t need an $800 emergency room bill after our insurance has been terminated with the layoff. My wife and I discussed this just a week ago. We agreed to keep our fingers crossed and to police the kids’ activities with a little more vigilance to ward off any bad breaks, head bonks or other emergency room sureties.

The phone finally rang after what seemed like an eternity, and our friend in the allergy clinic said the words I needed to hear. “Tim, you can’t mess around with an allergy attack. Anaphylaxis can come on fast.”

We found shoes and car keys and said a silent prayer that the extremely small amount of gas fumes left in the SUV would be enough to get us to emergency.

My daughter kept looking at me funny, but I was looking back to check on her every five seconds, so I can hardly blame her. I was also trying not to panic, though the thought of her little throat swelling shut kept my mind fluttering between negative thoughts and a vague awareness of traveling down I-90 at 75 miles an hour. 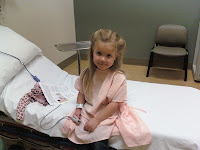 At emergency, the triage doctor asked all kinds of questions I didn’t know the answers to. Didn’t even get her birthday right, though I was within two days. I kept trying to call my wife, whose phone was on vibrate in her purse, while telling the doctor I had no clue if she was up to date on her immunizations.

She sat there shy and probably nervous. It was difficult to tell, but the room was filled with all kinds of technology, and I kept seeing flashbacks to “ER” and “Gray’s Anatomy.” Like most hospitals, the docs and nurses were extremely attentive and made soft sounds using gentle words while getting down on their knees to address her.

I finally got a hold of my wife and told her we were at emergency but that Gabbers seemed all right. She said she was on her way and hung up.

The doctor asked a lot of questions about breathing and noticed that her uvula, that little tear-drop-shaped flap of skin in the back of the throat, was a bit swollen and red.

We both wondered what was taking mommy so long.

She finally walked in shaking and breathing fast, and I assumed she’d let her mind get the best of her on her way to emergency the way I had. But she said that she had been hit while waiting for a parking spot.

“Oh crap, tell me the car is drivable?” 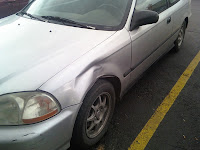 She said it was, that a fellow driving a Suburban had backed into her despite the fact she laid on the horn. The right driver-side panel was crunched in pretty good.

I told her the doctor wanted to dose her with an EpiPen and then observe her for an hour or so, and she caught her breath and called in the accident to our insurance.

As Gabbers started to improve, I started reflecting on the day.

Double doses of bad news can make anyone want to give up. I felt that way yesterday afternoon. Like all the cards are stacked against you, and you’ll never crawl out of whatever bad luck hole you stumbled into inadvertently.

Money guides so many of our decisions in life. More often than not we’re influenced by fear, which can become pervasive at times, especially in times of great turmoil or change. Being laid off can almost paralyze you with fear and change the way you make decisions.

After we got home, we decided to head back to town for a pizza dinner at Biga Pizza, where we decompressed and unloaded our fears and frustrations before a grateful feast of togetherness.