I love that feeling of turning onto a road I’ve never driven before. That moment when the familiar gives way to the unknown.
When your eyes fill up with brand-new views, and you have to work harder for every moment.
There is no auto pilot here.
When pulling off Highway 90 onto 18 in Madison, you can feel the transition more than just the four and five lines giving way to two lanes. You can feel it in the increasing number of pickup trucks, combines, clotheslines, Chevy Caprice police cruisers and supper clubs.

END_OF_DOCUMENT_TOKEN_TO_BE_REPLACED

I didn’t start out planning to do a Southeastern United States craft beer tour.

It just happened to turn out that way.

I’ve become a bit disillusioned by craft beer in the two and a half years since I moved to Chicago.

From hoarding to overnight lines for new releases to subpar beer pushed out as aging liquid and everything in between, the craft beer world doesn’t represent the community spirit that I have come to know in places like Oregon, Montana and Alaska. Small breweries bent on craft and who cater to their immediate audience are what represent the trueness of the profession or art form to me.

END_OF_DOCUMENT_TOKEN_TO_BE_REPLACED

I’ve migrated all the old posts to Killing Ernest, and I promise to continue to blog our Alaska adventures as well as my take on the media and the big events of our times.

Thanks so much for following me at Ninetynineweeks and 64 North. I really enjoyed the interaction, and I hope we can continue that at www.timakimoff.com.

I remember being called into the publisher’s office on that last day of August. That sinking feeling of knowing that somebody knows something you don’t. The looks on their faces. Sad, but not really sad, more sorry for themselves for having to ruin their day or maybe just the hour, probably.

But then a little ray of hope.

“We’re going to let you keep your blog.”

“Yeah, it represents all your hard work, your blood sweat and tears.”

It’s not much of a consolation prize when you’re getting laid off, but it’s a helluva lot better than a cold, escorted walk to the door.

I remember thinking about it after the clouds of dissolution parted. It wasn’t a huge gift, and in reality, no one would be able to pick up after I left it. It’s too much of a labor of love. It’s something you have to give birth to. You can’t adopt a blog very easily.

But after weeks of sending E-mails asking about when I could transfer the blog to my own account, I started to feel like the child who is told there is a surprise in the next room just to remove him from the current room.

I started hearing about the newspaper editor spreading the news that I had somehow relinquished interest in the blog as she recruited new writers for it.

If I have learned anything from my wife in all the long years I’ve known her, it’s that she will fight for justice far more than I will. She has a sense for it that I do not. Perhaps I’m jaded, but I don’t believe man’s justice is wise, nor do I believe it prevails even when somewhat close to a universal sense of justice.

But with her encouragement, I sent notes out to the far corners of the corporation that formerly employed me seeking justice in the form of an appeal based on something that wasn’t in writing, merely the word of two respected co workers.

My appeal was returned today with these words:

“Tim, I have looked into the matter of this blog and your separation from Lee Enterprises.
The Missoulian intends to keep the blog and maintain the content.
As far as receiving an understanding to give you this blog; besides any authority Stacey and Jim may or may not have had to allegedly agree to this; you surrendered any claim when you signed the release of rights and claims and received your severance payment.”

I’m not the dunce whose appearance I must often give off. I understood at the outset that giving away corporate property is a big no, no. In fact, I have seen numerous battles over intellectual property like this. I know lawyers who deal specifically in this realm.

I did, however, believe the publisher when she said she would draw up papers regarding the blog if I agreed to sign the release of rights. I generally take people at their word. In this case it might have helped to understand all the legalities, something I’m going to assume neither of us knew very well.

But no matter, this battle is over, and it’s time to move on beyond it. To the writers who’ve inherited my progeny, I wish you the best of luck. When I say it’s a labor of love, I mean that completely. You will not love this. You may, in fact, come to hate it.

Justice is better served cold. I do not feel a warmth for it as my wife does. Instead, I’d rather look beyond perceived personal injustices and out toward those places where injustice, if it’s a quantifiable thing, occurs to the point of matching those universal laws, those unalienable rights we like to chatter on about.

These are worth pursuing when it comes to justice. A silly little blog is hardly worth fighting for. Maybe it’s just the principle of the thing. Maybe it’s my arch nemesis, a characteristic conservatism that finds personification an an old editor I once worked for. Or in the uphill battles against the old mindset that I fight against on a daily basis. Principles are worked out in the individual. You live by yours, I’ll live by mine.

And so my appeal ends, and it’s time to move on to the next new thing.

It all started in the fall of 2006. My editor was staring down the barrel of huge changes at Gannett, one of which was the emergence of social media and blogging at newspapers.

He asked me if I wanted to, along with a co worker, cover the International Beer Festival in downtown Portland and write about it for the newspaper’s web site.

We did, and “Will Blog for beer” was born. I have no way to prove this, but our research shows we were the first newspaper beer blog in the country.

With $20 a month, out of our editor’s own pocket, we wrote about new beers and attended the yearly hop harvests and did beer and cheese tastings with local artisans. We made videos and had a great time. Then my co-blogger was fired after he fell asleep in court after having covered the new cops shift from 6 a.m. that morning.

The very next co-blogger turned out to be one of the best people I’ve worked with in my six-years in journalism. An extremely talented writer and a newbie to craft beer, Michelle Theriault provided that sassy, skeptical voice that the blog needed so badly. I, after all, am an ardent supporter of almost anything man can brew and unashamed to say so in print.

Eventually we would split up too, after having witnessed the Oregon craft beer revolution from front-row seats.

Theriault left to attend grad school, and I took a job as the online reporter at the Missoulian in Missoula, Montana. One of the first questions they asked me was if I’d consider writing a beer blog for them.

The Grizzly Growler was born in the early summer of 2007. A hot and unbearable summer, it was only quenched slightly by Montana’s growing craft beer scene. But that summer was a lot better than it would have without a good diversion from the smoke and fire all around.

For three years, GrizzlyGrowler.com provided a backdrop to a growing industry in a state with the highest level of beer consumption per capita in the country. That might be considered crazy, but Montanans like their beer, and as it turns out, they like to read about beer too.

From just a few followers to more than 10,000 page views per month and over 1,000 posts in three years, GrizzlyGrowler.com has been a community within a community, a place to talk about every new flavor, style or event in the state.

With “Will Blog for Beer,” things ended gradually, and the following, while good, was not as strong as here in Missoula. Grizzly Growler took on a life of its own, with a faithful following among area brewers who would gladly pass along tasting notes on new beer styles or give me a short video interview.

I took on beer blogging partly to cut the monotony of beat reporting, and it became a part of who I was as a reporter. Each city and every new brewery had its own identity that made the job extremely fun.

To my Grizzly Growler readers. Sorry to come to such an abrupt end. If I could bequeath this to someone else, I would. If someone could pick up where I left off, I would do anything to make that possible. Unfortunately that won’t be possible.

I do hope someone in Missoula picks up the craft beer blog torch. A central clearing house for beer information is a great thing for brewers and beer fans alike in Missoula.

And most importantly, I want to thank all of you for your openness, your willingness to teach me and interact with me.

To those who walked me through the process and invited me in for tastings, especially Matt Long, Tim O’Leary, Thorsten Geuer, Josh and Craig at The Rack, Mike Howard, Brian Smith, Dave Ayers, Jake and Tony at Bitterroot, and Travis Zielstra. There are others, you know who you are. Thank you for making the last three years and Grizzly Growler everything it was. I learned more in that time than in all the years I’ve been enjoying craft beer. Your company and your expertise will make for great memories in whatever happens next. 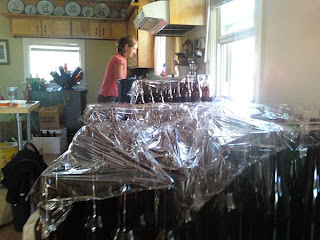 How I spent my Sunday

Beer waits for no man. And when we brewed this dark, Belgian beauty it was months and months before I  was laid off. It sat for a long time in a French oak merlot barrel soaking up tannins and wine acids, while we went about our business. Well, today was our date with destiny, a long and arduous destiny with what seemed like a million brown and green bottles in the Lewis/McBryde Casa. Sometimes I like the continuous and traditional aspect of beer and the process of brewing and fermenting. It’s unshakable and never changes at all, and yet you end up with something amazing every time.